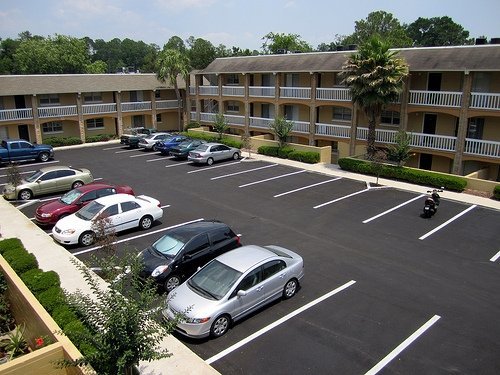 Spanish Trace is approximately four minutes away from the University of Florida campus by car or bus. It is also located in an area that makes walking to campus possible, although students should expect the walk to take 20 minutes or more depending on a variety of factors such as campus destination and route selection. Biking is possible with many routes available. It can take anywhere from 10-20 minutes to reach campus by bike.

There are five bus routes provided by the Gainesville Regional Transit System that serve Spanish Trace. These are routes 1, 12, 34, 36, and 38. Students are likely to find the 12 route between the Reitz Student Union and the Butler Plaza Transfer Station to be the most convenient. Buses run every 10-21 minutes Monday-Friday and every 23-46 minutes on the weekend.

It is certainly possible for residents to drive their own vehicles to campus and park in a commuter lot. This can take as little as five minutes when traffic to and from the campus is light, or as much as 10-15 minutes when the traffic is at peak volume. Students should factor in the time it takes to find a parking spot and walk or bus to their classes.

Spanish Trace is located in the Archer Road area of Gainesville, a popular spot which features many restaurants, retail shops, and grocery stores. Among the largest retail centers in the area is Butler Plaza where students will find numerous stores. Butler Plaza can be reached by walking or by car from the complex in a matter of minutes.

Retail outlets in the area include WalMart, Target, Best Buy, and Old Navy. Grocery shopping can be done at a nearby Publix or Winn Dixie. A number of fast food chains have restaurants in Butler Plaza. These include Taco Bell and KFC. There are also many full service restaurants such as Olive Garden and Outback Steakhouse in the area.

All in all there are more than 100 shops and entertainment venues in Butler Plaza. This includes movie theaters and popular attractions like the Florida Museum of Natural History.